Why are girls diagnosed with ADHD and ASD later than boys? 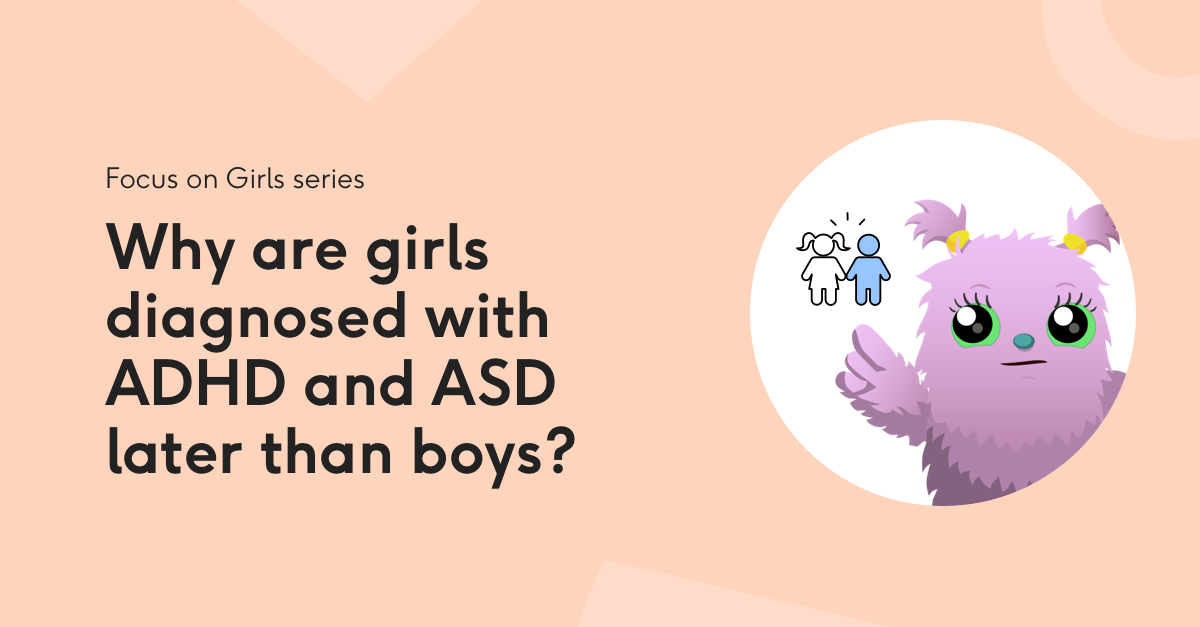 Indeed, in Australia, more than twice as many boys aged under 14 are diagnosed with ADHD compared to girls of the same age (5.8% vs. 2.3% of the population).1 Similarly, boys are four times more likely than girls to be diagnosed with ASD (1.1% vs. 0.3%).2,3 However, these statistics are far from the whole story.

Most of what we know about ADHD and ASD has been learned through observation of boys. But research is increasingly showing girls experience and show associated difficulties differently.4,5 Consequently, there is a higher percentage of girls that go undiagnosed for ADHD and ASD — sometimes for their entire lives.

“There are a number of things contributing to a perfect storm of under-diagnosed girls and women,” explains Dr Simone Gindidis, Developmental Psychologist and Clinical Lead at TALi, referring to ADHD specifically. “ADHD has a gendered image problem, which contributes to it not being well understood.”

For most people, when they think about a child experiencing attention issues they are mostly aware of things like difficulty focusing, sustaining attention, planning and completing work — which all kids can experience. For some reason though, when people think of ADHD, they think of disruptive behaviours that are largely associated with the impulsive and ‘hyperactive’ actions of boys.

“There are proportionally less girls with ADHD who fit this stereotype as girls tend to present with less disruptive or overt symptoms,” continues Simone. “These symptoms are categorised as ‘inattentive’, so their struggles can be easily missed by educators and general practitioners.”

Tom Osborn, Clinical Psychologist and Director of Chology believes a similar situation is occurring with girls and ASD: “It is usually females living with high-functioning ASD who fly under the radar or are ‘missed’,” he admits. “Girls with more severe cases of ASD are generally noticed earlier on in their development and granted the appropriate supports.”

Just as Simone notes for ADHD in girls, Tom acknowledges that there is a lack of awareness about the female presentation of ASD – both at a community level and among healthcare professionals – which can be quite distinct to a ‘typical’ male on the spectrum.

“Correctly identifying females with ASD can be very challenging based on a brief interaction with the individual,” adds Tom. “A gold-standard diagnostic assessment of ASD involves three to five or more hours of evaluation before a determination is made. We shouldn’t expect healthcare professionals to make a quick judgement call in these cases. Though, unfortunately, these premature conclusions are being made and often result in a missed diagnosis.”

Tom also attributes high assessment costs, long waitlists and a lack of local services as being likely contributors to this issue.

Simone suggests that increasing familiarity with how symptoms of neurodevelopmental disorders such as ADHD and ASD commonly present in girls and women will help general practitioners with offering timely referrals for comprehensive assessments and support from professionals like psychologists and paediatricians, including those with advanced training in the area such as Educational and Developmental psychologists. However, she also acknowledges that general practitioners operating at the coalface of public health are often under-resourced and may easily miss symptoms even with further training.

For all children with ADHD and ASD, early intervention is key to supporting them throughout the school years, when they are developing essential literacy and numeracy skills, and forming important peer relationships. But parents, families and teachers can also be on the lookout for these subtle gender differences to help give girls the best possible opportunity to learn and thrive.

This is an expanded version of the expert comments provided by TALi’s Dr Simone Gindidis and Chology’s Tom Osborn in an article published in Melbourne’s Herald Sun.

The article forms part of TALi’s Focus on Girls series.

If this article has raised any questions, please consider reaching out to one of the below organisations for information and support:

Amaze — Shaping the future for autism

Share:
Related Articles
What signs of ADHD and ASD may be overlooked in girls?
Parents, Schools, Healthcare

How can delayed diagnosis of ADHD and ASD impact girls?
Parents, Schools, Healthcare

Unknowingly living with attention deficit hyperactivity disorder (ADHD) or autism spectrum disorder (ASD) can be a...

Attention and circadian rhythms — how they groove together
Healthcare

We all know the importance of a good night’s sleep, whether we’re a child or an adult. We feel refreshed, clear-headed and...